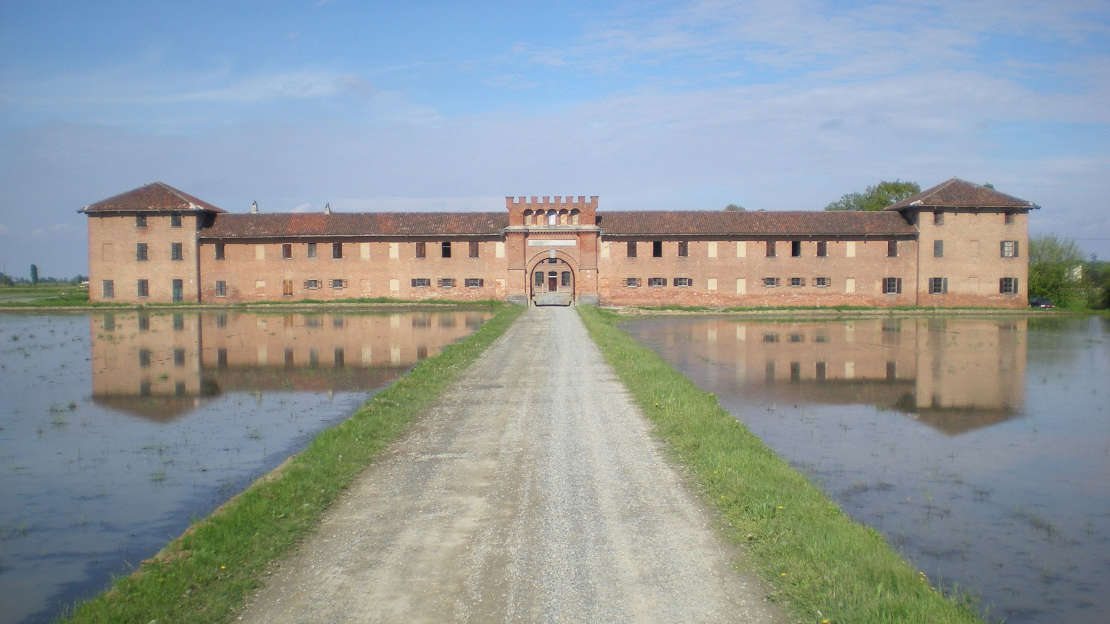 A mondina (from the verb mondare, to clean) was a seasonal female worker in the rice fields before the arrival of machinery at the end of the 1950s.
The work took place during the flooding of the fields, from the end of April to the start of June, to protect the delicate rice plants from the shift in temperature between the day and the night during their first phases of plant growth. They transplanted the shoots to rice fields and removed the sylvatica variety of invasive weedy rice from the rice fields. Working conditions for the mondine were very tough: the hours were taxing and the women were paid much lower than men. This caused increasing unrest, which turned into demonstrations and uprisings in the early years of the 20th century. The main demand was summed up admirably by a song, ‘Se otto ore vi sembran poche’ (If You Think Eight Hours Seem Few), which symbolised the wage demands made in 1909 that led to an agreement being drawn up in Vercelli: eight and a half hours, with a commitment to eight hours for 1910. That was the end of the first – historic – struggle by the mondine and day labourers of Vercelli, who were the first in Italy to get an eight-hour workday.
In commemoration of the mondine era, when the women often headed to the rice fields by bike, FIAB Monferrato Bike in Casale Monferrato has prepared a series of routes that cover some of the Strade del Riso del Vercellese (Vercelli area rice roads). This route illustrates some historic points that recall the period.
Start from Morano sul Po, a village in Monferrato bordering the Vercelli area. The route extends over the mare a quadretti almost in its entirety. This definition, meaning ‘sea of squares’, is a good description of the vision of vast expanses of rice fields parcelled out and flooded in the spring. You will arrive at the hamlet of Due Sture. Follow an initial stretch of track towards Regione San Giovanni, then go past the farm and take the farm track through the rice fields to the hamlet of Saletta. There are often drittoni to follow between the rice fields, that is, the straight and seemingly unending roads bordering the cultivated fields. From Saletta, go to Costanzana then head on towards the Madonna delle Grazie Shrine. After Cascine Lamporo, take the road for Desana and turn right to go to Desana, a village which preserves a picturesque castle with park.
Head towards Lignana from the village, then on Strada delle Grange turn towards the Veneria Grange. This site was refurbished in 1938 under the ownership of the Istituto Finanziario Industriale, which had Giovanni Agnelli for its chairman. This resulted in providing work for more than 800 mondine. Miraculously, Veneria emerged from the war unscathed, after which the estate became part of the canon of Italian cinema thanks to the memorable film that Giuseppe De Santis shot parts of here in 1948: Riso Amaro (a pun on ‘Bitter Rice’ and ‘Bitter Laughter’). Silvana Mangano, Raf Vallone and Vittorio Gassman starred in the film. Next to the building, take the track from the cult location that saw Silvana Mangano posing sensually in a rice field, until you arrive in Ronsecco. Here there’s an eatery offering typical dishes from the Vercelli area: panissa, risotto with beans, and d'la duja salami. From Piazza Vittorio Veneto, turn left onto Via Giulio Pasta. When you come to the next junction, take the track on the right. When you get to the SP 34, turn towards the charming Darola Grange, a grand, historic farmhouse with an enclosed courtyard, then turn right again onto the track that leads to the SP 1. Turn left and then immediately right towards Castelmerlino. At the end of the drittone, turn left to reach the ghost town of Leri Cavour, the former summer residence of Count Camillo Benso of Cavour. Keep straight on and enter the road that circles around the former Galileo Ferraris thermal power station. Turn right and follow until a dirt road can be seen on the right, which leads off the circuit. After a few metres is Tenuta Colombara, known for the famous and award-winning Acquarello rice. This is an opportunity to visit (subject to booking) the Museo della Civiltà Contadina (Museum of Peasant Life). Around the farmyard are entrances to the living spaces of the mondine, you'll see the straw beds, objects and furnishings that accompanied these women’s tough lives. It’s as though time has stopped here!
Carry on to Fontanetto Po, home to the historic Mulino San Giovanni rice mill, its machinery driven by water. The site has been turned into a museum that can be visited by appointment, to learn about the cultivation and processing of rice.
When you’re back on your bike, continue alongside channels and rice fields to Palazzolo Vercellese and then to nearby Trino, a border town between Monferrato and the Vercelli area. The final visit on the route is reached by going in the direction of the River Po, towards Camino. Here, just before the bridge, turn left for the Pobietto Grange. This grand agricultural estate was, historically, part of a network of estates connected to the Lucedio Grange, which now serves as part of Parco del Po (Po Park). Here too is a Museo della Civiltà Risicola e dell'Ambiente di Pianura (Museum of Rice Culture and the Plain), set up in what was once the mondina dormitory.
This trip in honour of the mondine is almost at an end, but there’s still a particular path among the rice fields to take before it’s over. From the bank of the River Po, go about 100 m along the ridge  – tightrope-style – at the border between a wood and a rice field. At the end is a convenient dirt road that takes you through the woods to the residential area of Morano sul Po and the end of the route.